This unusually-large carving high on the church-tower is probably late-12th or 13th century -
though it certainly was inserted much later into the flint-built tower, and cut to make a unique window-top. 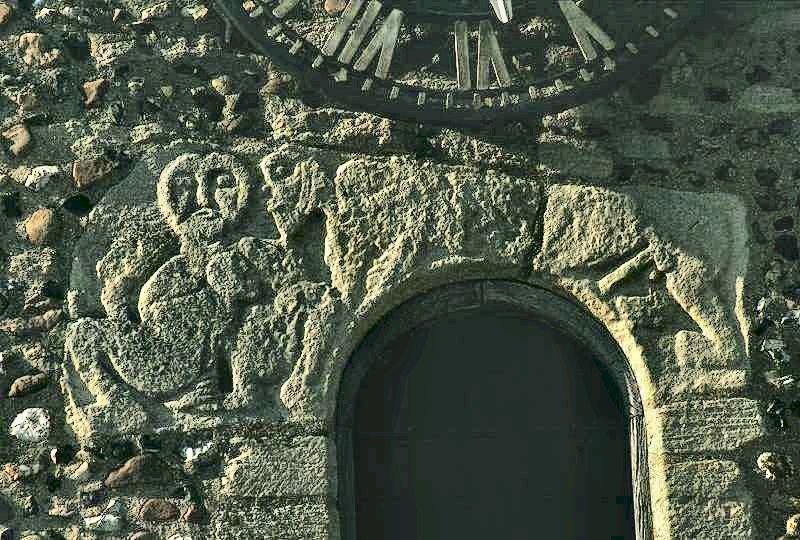 The ithyphallic male figure is an unique variation of the Romanesque and pre-Romanesque "Whispering Beast" motif
which usually has two flanking beasts who seem to be whispering (or shouting) into the sinner's ears.
(In the later Romanesque period, the open jaws of the flanking monsters symbolise the devouring jaws of Hell.)
The female here, however, does not have any ears!
Note how her right arm passes under her thighs to pull open her vulva in a classic 'sheela-na-gig' gesture.
Compare the scene with the carving from Kirknewton in Scotland;
the male figure with another English carving at Abson (Somerset),
and the female with Irish figures on castles as well as churches.

Compare with a palæolithic fragment from the Mas d'Azil in France. 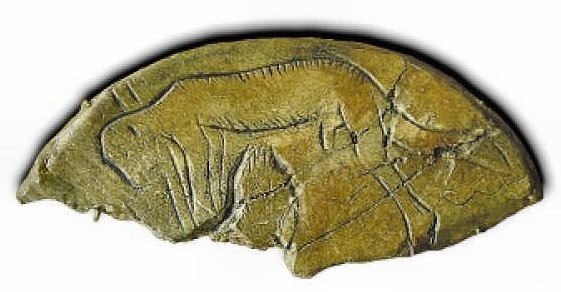 One certainly starts to consider the possibility that such fragments - or drawings of them -
might have been traded and carried around by sculptors.

A figure (unfinished bison, or bison-spirit ?) at the Grotte du Pech-Merle (Lot) France.

It seems to me that the remarkable Whittlesford carving with its Romanesque "Whispering Beast" motif
is related to (or possibly modelled on) an earlier, twelfth-century capital on the chancel arch
of the parish church of Rock (Gloucestershire), described thus:
"an exhibitionist with arms outstretched and holding the knees, which lie in the centre of each face.
A serpent emerges from the waist to R and L, loops beneath the thighs and up behind the arms to bite the ears.
At the upper corners of the W and S edges of the block are two stylised triple leaves." 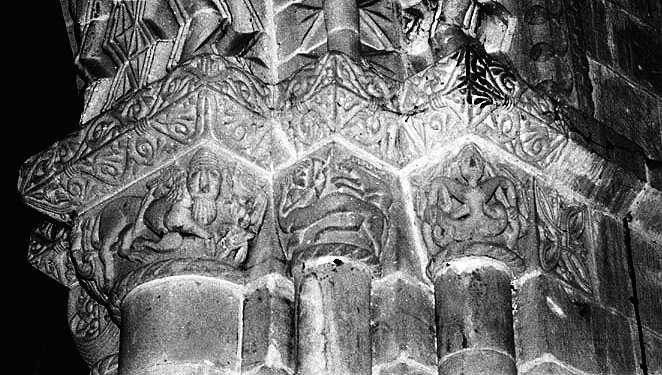 A good example of the flanking beasts of Hell is one of several related motifs on a remarkable ambo
or preaching-pulpit in the church of San Pietro at Gropina (Arezzo), Italy.
A strange acrobatic figure (also without ears) is assailed by two toothy serpents.
In high relief is the eagle of the Holy Ghost standing on a human figure who is riding a lion.
This symbolises the hierarchy of nature.

Below the acrobat is a superb multi-finned mermaid with amazing tresses. 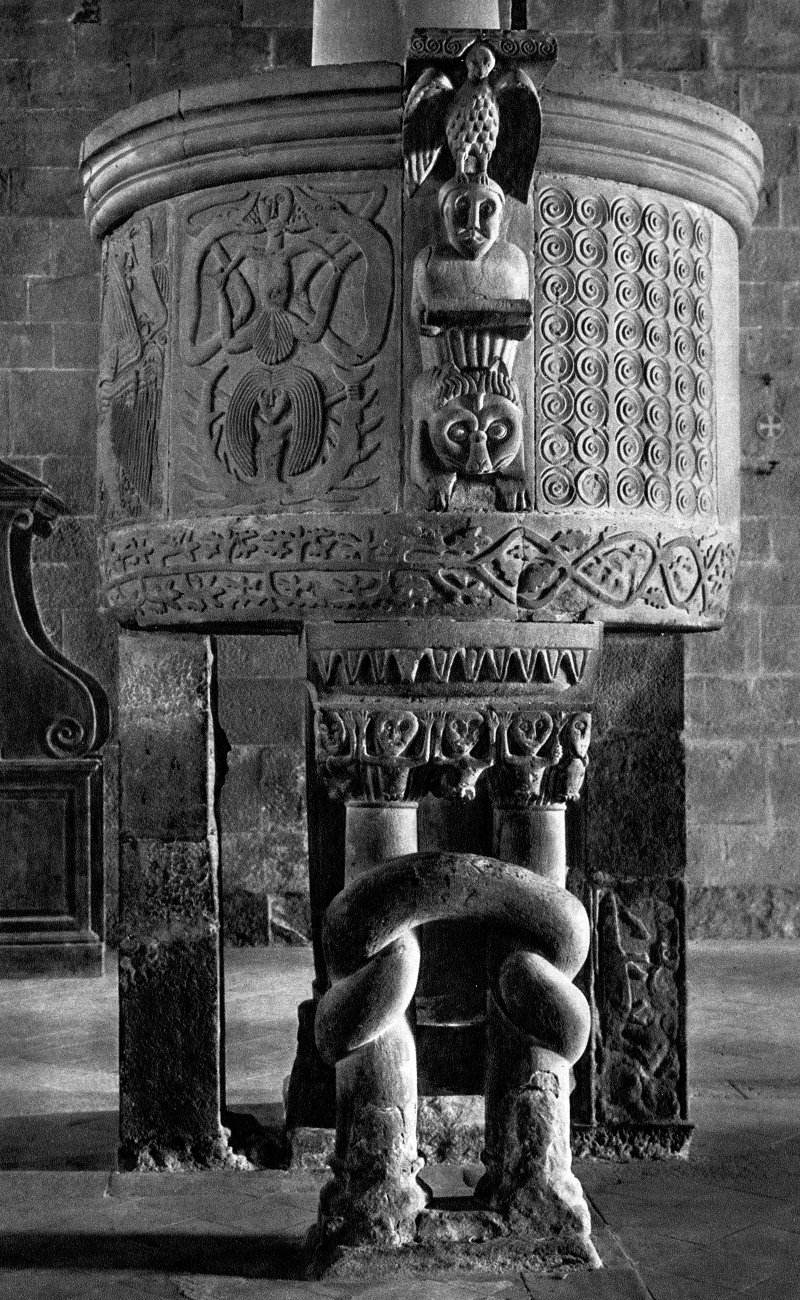 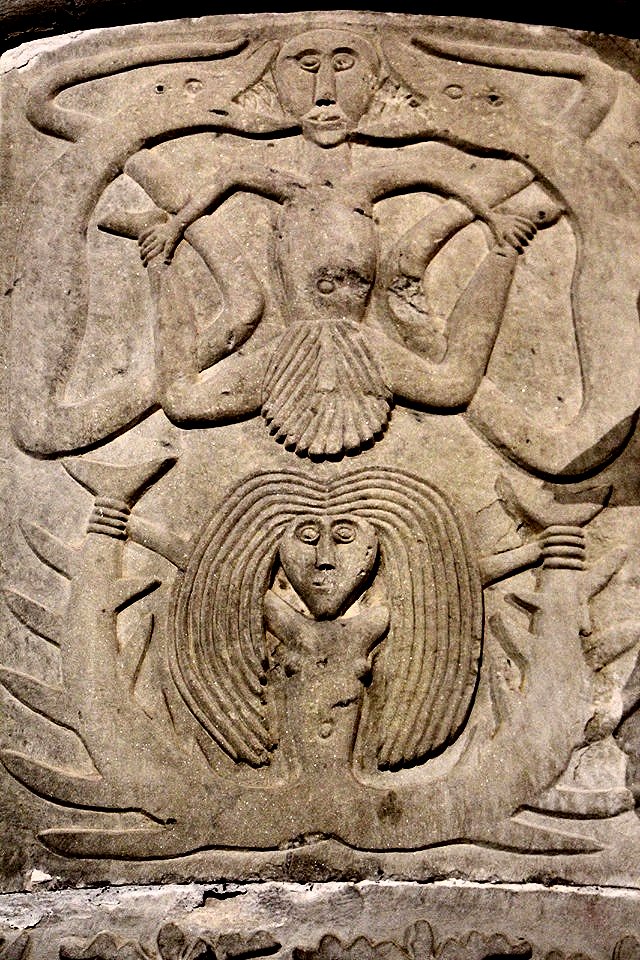 Hacked from another piece of sculpture of possibly-earlier date is a capital resting on two columns joined b y a knot.
The capital shows a row of naked (but neither ithy- nor mega-phallic) men with arms raised in the age-old orans gesture.
The bovine head above one of the men is similar to those found on thousands of 12th century corbels,
but does not belong to the line of men, one of whom is dangling in space, thus indicating that this is a re-used fragment. 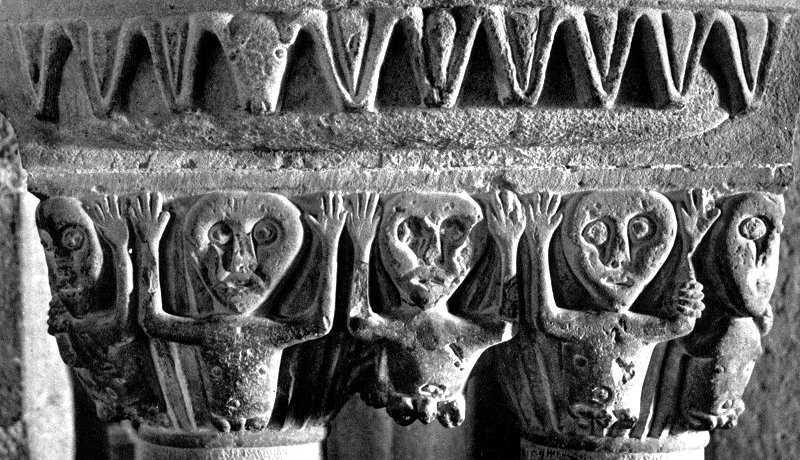 
Another example of a bizarre figure - even by Romanesque standards - is to be seen on the cathedral at Modena.

I cannot decide whether or not the figure is hermaphrodite
like this other low-relief at Modena. 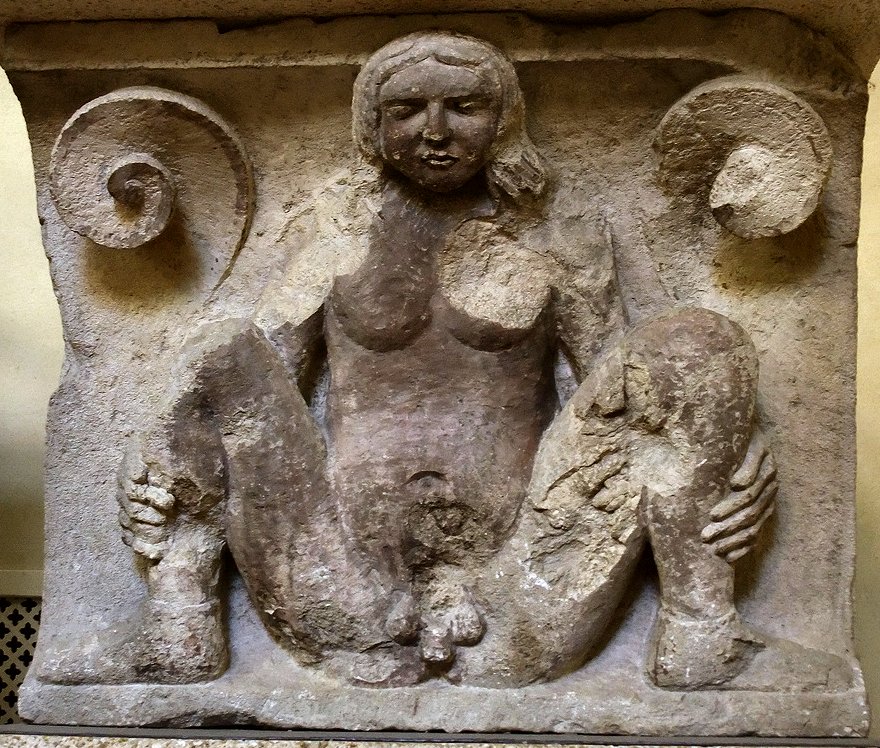